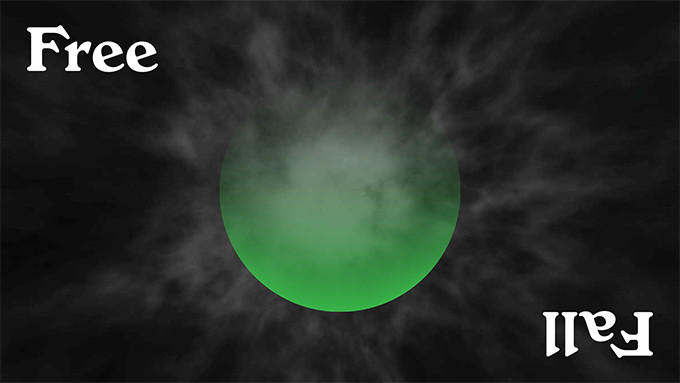 Free Fall is Dana Gingras’s new creation for an immersive dome theatre and virtual reality. The immersive film presented in the Satosphère is a physical experience of vertigo and transcendence, produced by the circular motion of falling bodies subject to gravity. This force flows in us, through us and around us. The immersive experience seeks to stimulate the viewer’s senses in unexpected ways, causing surprisingly visceral and psychological sensations that give rise to a feeling of abandonment and movement through a vortex of interstitial space.

Free Fall offers a temporary escape while reminding us that the pull of the earth and our finality are inescapable. It evokes curiosity and a sense of freedom by blurring the lines between human forms and their movement, and by disrupting our usual understanding of space and how our senses engage within it. Dana Gingras is a choreographer, filmmaker, performer and teacher. She co-founded The Holy Body Tattoo (1993), and then with Animals of Distinction (2007), earning numerous awards and honours for its stage and film work. Her short film Chainreaction (2014), a Microclimat Films production, world premiered at TIFF. In 2016, monumental (2005), this expanded version of the piece with Godspeed You! Black Emperor playing live has been performed as part of Luminato Festival and at the Barbican in London. In 2017, Dana received a long-term residency at the Centre de Création O Vertigo (CCOV) of the Place des Arts of Montreal and through this will produce new large-scale work entitled Frontera. Marie Brassard is an author, director and actress. In 2001, she initiated a solo career and founded her own production company, Infrarouge. Since then, in close collaboration with musicians and visual artists, she has created surrealist theatre with virtuoso acting skills and innovative video, light and sound installations. Blending voices and music, crossing different levels of reality, her productions carry us to a world in which the lines between private and public become blurred. Indeed, in this world, the relationships between humans and technology become intimate. Expression of a singular voice in the theatrical landscape, her pieces have been presented and warmly received in many countries in the Americas, in Europe, in Japan and in Australia. She occasionally works in the dance world and sometimes acts in films. In the summer of 2016, she was awarded the Quebec’s Order of Arts and Letters. Olivier Lemieux is a Montreal based trampoline virtuoso and artist acrobat who has worked in high level trampoline. He has performed for Catwall Acrobats, Productions Haut-vols, Cirque du Soleil (Dralion), Cirque Éos, and Cirque Éloize. He has 25 years of experience on stage including tv shows. Promoted in 2007 from the School of Contemporary Dance in Montreal (EDCM), Esther Rousseau-Morin has since collaborated with companies such as Le Carré des Lombes, Lorganisme (Caroline Laurin-Beaucage), Le fils d’Adrien danse, Montréal Danse, Créations Estelle Clareton, Trois Tristes Tigres, and most recently she appeared in monumental a production by Animals of Distinction.  Rousseau-Morin continues her development by participating in training workshop of the repertoire of several works. She also worked for 6 years as assistant to Sylvain Lafortune's classes, with whom she created L'un L'autre presented at Danse Danse in October 2018. The piece Gratter la pénombre marks a precious collaboration of 12 years with the company Alan Lake Factori(e). Sovann Rochon-Prom Tep, aka Promo, grew up immersed in Montreal's breaking community. He becomes a member of the Sweet Technique group, with whom he participates in many competitions over the years, further developing his talents. To date, he has chalked up over thirty victories and is frequently invited to participate in competitions around the world, either as a participant or as a judge. His passion for the mastery of the body spurs him to enter the École de danse contemporaine de Montréal in 2011.  Since then, he has worked with Animals of Distinction, Castel _Blast, RUBBERBANDance Group, 14 lieux, Lilith & Cie and Susanna Hood. Sovann Rochon-Prom Tep continues to refine his approach through his own creations and the different workshop he teaches. Roger Tellier-Craig is a Montreal-based electronic musician. Fascinated by both digital and analog tools, his work explores a range of different approaches and technologies to develop a timeless aesthetic. He was a founding member of Fly Pan Am, Et Sans (with Alexandre St-Onge), Set Fire to Flames and Pas Chic Chic, and a guitarist for Godspeed You! Black Emperor. He is currently working very closely with video artist Sabrina Ratté, providing the soundtrack for most of her videos, as well as duet with Sabrina in the audiovisual project, Le Révélateur. Josh Sherrett is a Montreal-based filmmaker and visual effects master who embodies the rare combination of technical virtuosity with a finely attuned aesthetic instinct. He has worked on countless projects for worldwide high-end corporate (YSL, Mozilla/Firefox, Samsung, Hermès Paris, Reebok, Kijiji, RBC, Sprite, SAQ, CBC, Discovery Channel and National Geographic) and film industry clients (in films such as Sin City and 300) for over 25 years. In 2009 he founded his own post-production house, The Workshop, in the neighbourhood of Mile End. Recent work includes an Art installation with the Sanchez Brothers for Leonard Cohen: A Crack in Everything at the MAC and Wiz Khalifa’s Hopeless Romantic music video. Catherine Chagnon produced Danse Macabre in 2008, a critically acclaimed short film that won the TIFF Best Canadian Short Film, Jutra and Genie Awards in 2009. In 2010, Chagnon founded the production company Microclimat Films. Focused on producing innovative projects, she has been involved in numerous productions and co-productions. In 2015, she co-produced the Indigenous collective The Embargo Project. In 2017, she produced the feature documentary Rue de la Victoire, with a world premiere at Hot Docs and an international premiere at El Gouna Film Festival in Egypt. Chagnon is an alumnus of the TIFF Talent Lab 2011, Rotterdam Lab 2012, OMDC International Financing Forum 2015, CineMart 2016, Berlinale Co-Production Market 2016, and BoostNL 2016.