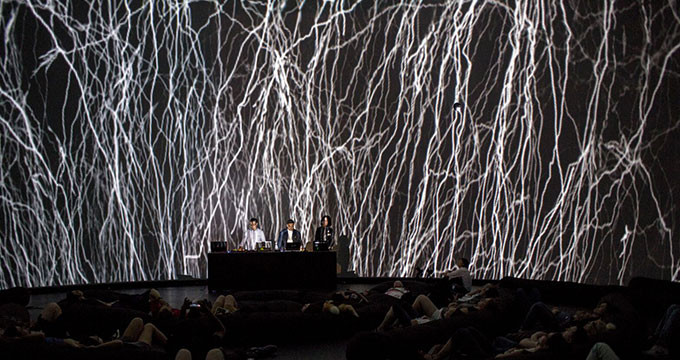 The Noesis project visualizes philosophical concepts, around the conceptions and ideas surrounding the origins of Nature, the Universe and all things, from the perspective of art. With the objective of visualizing abstract ideas", this project explores new forms of output, which will be beyond standard visual formats.

For Noesis, artists conducted visual experiments around themes such as “being wrapped by noises" and "viewpoint from the inside of the earth". Since the 90s Yamamoto has been utilizing video as a media art, especially as an extension to electronic music, thus approaching the field very different from the traditional movie perspective. Recently, his collaboration with Miraikan (National Museum of Emerging Science and Innovation) for the production of The Movements in 2014 became the trigger for his involvement in big data and science visualization. In his work Decommissioning Fukushima (2014) produced for NHK saw him challenging the visualization of time, while in Miraikan’s The Man from the 9 Dimensions he visualized scientific concepts like the superstring theory, resulting in a series of works outside the range of art/commercial. Audiovisual project by musician Tetsuji Ohno. Ohno began his music production career in the late 90s after spending the mid 90s as a DJ in and around Tokyo. Simultaneously he has been developing A/V works for live performances and advertising. Living in Japan, he continuously develops new projects that seek to organically connect human senses through integrated sound experiences in places such as National Museums, in artistic and commercial content productions. His sound carries strong characteristic of his experiences in the house, techno, noise, and electronica genres.