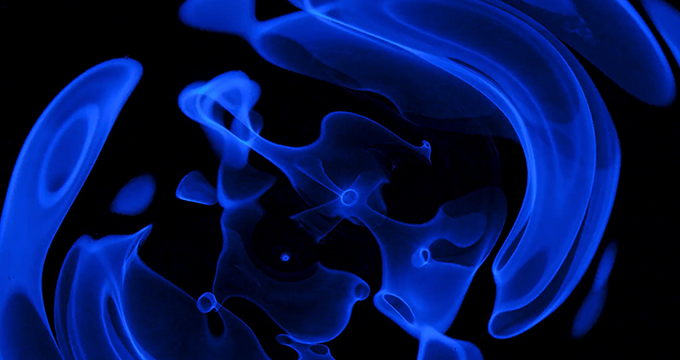 Following the current resurgence of COVID-19 and the Québec government's announcement to move Montréal into the “red zone”, the SAT must unfortunately cancel its public activities until October 28 in order to protect its employees and the public. We are closely following the development of health and safety guidelines and will post updates on this page.
For any questions, please feel free to contact us at [email protected]
Thank you for your understanding.

The SAT presents Take One, a video artwork directed by the italian artist Sandro Bocci, in collaboration with Iteration for music creation

About the artwork : The visualization of music through the surface tension and cymatics inspired this short film, not just for the fascinating patterns generated directly by sound waves, but also for the deep connection between sound and matter, which probably extends beyond our current comprehension of the physical law.

The video artword will be presented from Wednesday to Saturday during the Labo culinaire opening hours (3rd floor).

Come check it out ! Sandro Bocci is an Italian filmmaker and producer, specialized in experimental naturalistic filming and handcraft special effects. Influenced by studying fractal geometry in nature, he is experienced in shooting macro/micro and astrophotography. He recently collaborated on the production of the film Voyage of Time and Song to Song by Terrence Malick, and Darren Aronofsky’s TV Series One Strange Rock, providing special effects and additional footage. In addition to this, he works with other kinds of project, as well as virtual reality, art installations and interdisciplinary projects inspired by science and new technologies.

► More details and its filmography