A new chef for the Labo culinaire Foodlab 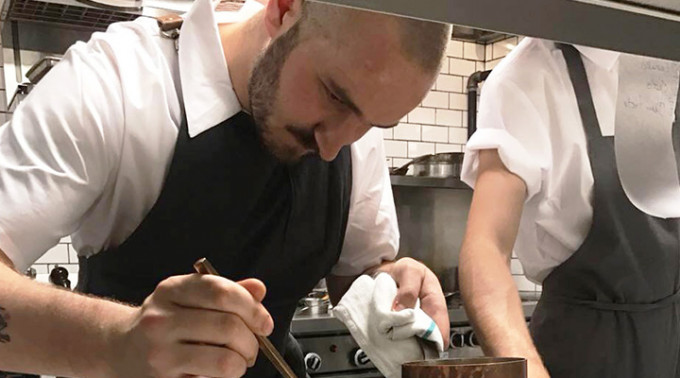 The SAT is happy to announce the arrival of chef Timothée Vielajus and his team at the Labo culinaire Foodlab on March 12! He succeeds Adrien Renaud who worked devotedly for the past three years and largely contributed to rooting the restaurant’s identity in a “farm-to-table” vision. By establishing close ties with small regional producers, Adrien Renaud created seasonal and harvest-based menus, and offered a cuisine that was at once local, responsible and refined. He skillfully developed culinary creations through collaborations, ranging from international influences with guest chefs from around the world, to local knowledge during friendly nights with other Quebecois chefs, farmers, market gardeners and sommeliers.

On behalf of the entire SAT, we thank Mr. Renaud for the remarkable legacy he passes on at the Labo culinaire Foodlab , and we wish him all the best in his future endeavours!

A graduate of the Institut de Tourisme et d’hôtellerie du Québec , Timothée Vielajus distinguishes himself by a rich career for his young age. An autodidact when he arrived in Montreal 6 years ago, he learned the rudiments of gastronomy at restaurant Les Trois Petits Bouchons , and became a cook at Fillettes. He began his training a the ITHQ while working simultaneously in the kitchens at La Salle à manger, Candide and the French Michelin-starred Le Fanal abefore becoming sous-chef at Chez l’épicier in 2018. He will now develop and share his culinary creations at the Labo culinaire Foodlab, within the ecosystem of the Society for Arts and Technology!

“I am happy to arrive in an environment where I will have space to create and experiment with new recipes with my team, and where the proximity of audiovisual arts will promote interesting exchanges between audiences and practices!” Timothée Vielajus stated.

Timothée’s cuisine is at once rich, refined, comforting and responsible. Continuing the partnerships with local producers, he is committed to preserving the biodiversity of ingredients by connecting with programs like Gardiens de semences, and collaborating with organisations such as Fermes Urbaines Ôplant.

On that note, stay tuned for more juicy details on the new team, who is officially taking over the reins tonight!