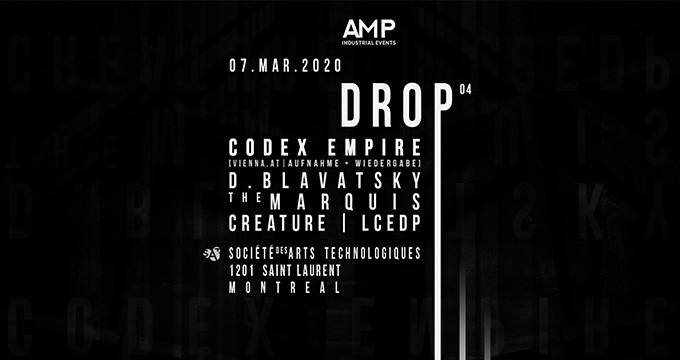 The 4th edition of a night exploring Industrial Techno and abyssal atmospheres -- deep.dark.heavy.

Since 2014 Codex Empire has built an international reputation for dark and intense techno productions and live shows. This March 7th event in Montreal marks his first Canadian appearance. Mahk Rumbae - the British born, Vienna based producer behind Codex Empire - has been creating challenging experimental electronic music for over 25 years working as one half of industrial/experimental band Konstruktivists as well as a number of varied solo and side-projects. Combining this background in dark electronic music with heavy rhythmic elements makes Codex Empire an intense and simultaneously danceable experience both live and on record.

Quickly becoming a dominant force within the Montreal rave underground- D.Blavatsky is a multidisciplinary artist and curator interested in the overlapping spheres of experimental techno and warehouse rave slime. Collaboratively involved in multiple Montreal home fronts like n10.as radio , Slut Island, and the monthly Monday night event Void, Diana is co-founder of the experimental rave series Vault, is working on an artist collective and label, Non/Being, and is now a resident Dj for OCTOV productions. An AMP favorite, thanks to D.'s visceral and tight Dj sets.

In live performance, the body becomes the object of consumption as much as the sound coming out of it. Solo Industrial project by multi-instrumentalist and composer, Tetsuo Paradis. This will be one of, if not the, final performance in Montreal by The Marquis before making Europe his new headquarters.